Mental Health Mondays – Pride Month: Where We Are; Where We Need to Be 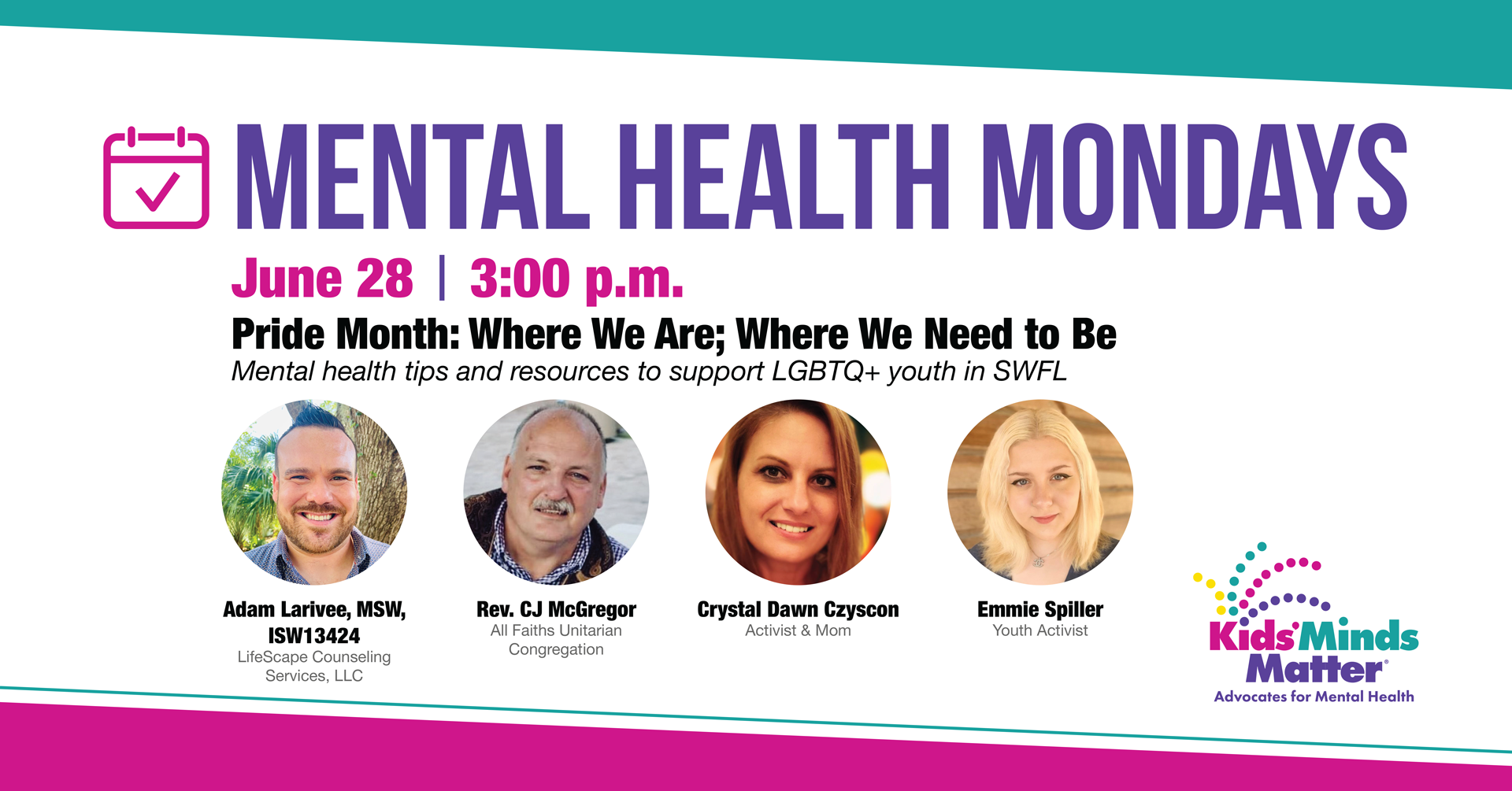 52 years ago, on June 28, 1969, is when the Stonewall Riots/Uprising occurred, the first uprising of the LGBTQ community, which started the path for fighting for equal rights. June 28 is also the 51st anniversary of the first gay pride parade. We’ve made great strides since then, but still have a long way to go for equal rights.

Emmie: These statistics are horrifying, but not surprising to me. LGBTQ youth who do not have support at home don’t have support in major media.

Rev CJ: We’ve created in our country an environment where LGBTQ youth are alienated and isolated. They are told they not whole or fully human because of their identity. If any human being is put in that kind of duress, they will find a way to escape. That’s where we come into suicide and other self-harm. What else jumped out to me was the intersection of oppressions. Because of their identity, they also become people who have experienced homelessness, food insecurity, violence. It makes sense that all these oppressions intersect with one another. The problem in our country is that we’ve created these conditions that we are asking LGBTQ youth to live under that is immoral and impossible. One of the things that is so perplexing to me is that faith communities that say they are Christ-centered but not inclusive. I don’t know how they can claim to be Christ-centered but exclusive.

Adam: Teenagers are already at an increased risk of suicidal ideation because of biological factors, individual and home factors. The ecological systems perspective looks at the person in their environment. Why are LGBTQ youth experiencing higher suicidality? We need to look outside of that person and look at them through the microsystem: family, peers, church, friends, school. We have youth who are dealing with additional pressures, additional bullying on top of what is already considered normal for an adolescent. They are dealing with questions of their identity. People think that when you are gay, it is easy to accept that you are gay, but it isn’t, and we know this. Then you have to take all these things and see how they interact on a mezzo and macro levels – including supports, society, oppression and resources available. Do the LGBTQ youth have the support that other youth do? No. This is especially true in SWFL. It becomes a multi-faceted issue that build and builds.

Crystal: It is very difficult to be a LGBTQ, particularly trans-gender youth in America right now with all the political attacks that are happening across the country. We talk about actualizing and what it means to be a person and the importance of peer and community support. We need to also look at what it means to have your entire existence debated. To make laws that say you don’t have the same rights as everyone else on this planet. Of course, that is going to impact their mental health. Of course, it’s going to create feelings of not being able to be safe or be their true selves. All of this debate is adding not only to suicide but also violence against our community and against our children. What are we going to do to protect our LGBTQ youth? It’s not just protection of their mental health, but also from outside forces and how they are all connected.

Where are We Going, Where do We Need to Be

Adam: At Life Counseling, we have worked hard to be inclusive. One of the statistics I found interesting is that the LGBQT community is engaging in mental health resources, but they aren’t staying because it’s not an inclusive environment. Being intentionally inclusive is so vital. To end the violence, I think that needs to come from education. If I don’t understand something, how do I access the resources to be able to understand? Youth should know they are able to access mental health services without parental consent. Find help and realize you are never alone. Telehealth has been strengthened by the pandemic, providing more access.

Rev CJ: I think in our country, many work hard to remove the rights and dignity of groups of people, in this case LGBTQ youth. How do we move from that and create wholeness for people? We spend so much time on hate. There needs to be a movement to counteract that. Hate has become normalized. I think that’s what we need to change. How do we keep hate and removal of rights from becoming normal? It’s to us advocates, faith communities, practices to be intentional about creating those accepting and loving communities. We as members of the LGBTQ+ community have a responsibility to tell our stories if it is safe to do so. LGBTQ Youth need to see they are not damaged goods.

Crystal: Being intentional is so important. It’s important not to look at the different communities as intersecting, but to look at them as a whole. We are all going to want the same things. We need to stop separating into these little groups and realize we all need to move forward together. I think that could be the big shift in 2021. We are missing community-based organizations for our youth to go to for safe spaces. Adults have that, but children don’t. We could work toward a Pride Center for Lee County with support for mental and physical health. We desperately need that here in Lee County. As a parent, when I was first trying to understand when my child came to me with these feelings, I relied heavily on mental healthcare providers. It was difficult to find supportive services in Lee County. My child was in a lot of pain. We had doctors, therapists and others. They emphasized how important it was for him to be around people who were like him. Being with another trans child would mean so much. I think we need to look into providing these spaces. If we live in an environment where they don’t feel it’s safe to even come out as trans, how are they going to gather together? This is something as a community we should provide them. It’s important that we can give our LGBTQ a voice. We have to show our LGBTQ youth they can fight and have power.

Emmie: Education is the biggest key. There are youth losing their lives over this because of hate being normalized. There needs to be education. Have those uncomfortable conversations when it’s safe to. There are programs available for youth. I think part of the problem is there are so many youth that aren’t able to engage because they are in households that aren’t supportive. I’m lucky because I have a supportive family, but I have friends who don’t and are afraid of going out and their parents finding out who they are. I feel our school systems need to be more open and safe for everybody. Social Media can have negative impacts, but it is also a networking vehicle for kids who are not able to go places in person and have that support. Look for resources and put them out there when you can. Share novels that have that representation. Show kids and youth that it’s OK to feel different. It’s important to show it’s OK to be different, even at a young age.

Q: What are ways we can work to increase safe spaces and resources in the school system?

Crystal: One of the first things is to get involved. Read the school conduct guidelines. Hold your school and county officials accountable. If you see non-inclusivity and discrimination, call it out. If your child is not being treated properly or you see discrimination, it is up to us to keep naming it. Demand that teachers create safe spaces in classrooms. Demand that teachers have safe space, inclusivity training. Currently in Lee County, it’s not mandatory. We should have all teachers educated in safe spaces and inclusivity for our LGBTQ youth. We should elect officials who are going to support our children, not officials who will continue a cycle that needs to end. If the law is the law, why are we allowing these people to create different narratives? When we all start saying no together, that’s when change happens.

Adam: One of the best resources is the thesafezoneproject.com project. It’s a two-hour training that anyone can access and it’s entirely free. If you don’t know how you can support, you don’t know the lingo, you don’t know where to start, check it out. It’s entirely free. Great agencies like the Trevor project also have training. And for LGBTQ youth, be open to receiving that support. Don’t feel afraid. There are four people on this presentation. Imagine how many others are there to support. If you don’t have the support at home, you have to build your own support network, and that can feel daunting, but help is available.

Rev CJ: It’s so important to have safe spaces at our schools, because many of the youth we are talking about don’t have that at their homes. We need to educate ourselves about who is making the decisions and then we need to go to them and demand what our children need to be healthy physically and emotionally. I think parents and families who are caring for our youth need to understand their rights. They have the right to education and to not be discriminated against. We need to know our rights and exercise them. We need to show up and say this is not OK and we demand better.